In the spirit of the season... 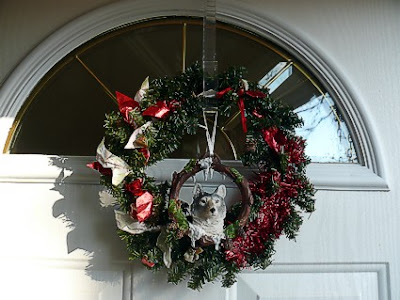 Gosh, what a busy-busy day. Hence my flash scene has been delayed. This week stars White Fang Khent, ace crime reporter. He was my very first character in Talbot Peak. Because, at the time, someone had to rescue Kitty [Dante's beloved mate].

ONCE AGAIN: Every soul, shifter and supernatural, wishes you and yours the merriest and most miraculous of holidays.


In the spirit of the season...

In the spirit of the season, White Fang Khent, super wolf shifter and ace reporter, hung the festive holly wreathe on the front door of the Moonrise Daily Tribune, a quaint, two storey building with tall, white-framed windows. He and Night Runner, another super wolf from his homeworld of Syxxrion, had used their flash-speed to put up the red-brick structure, nearly overnight. That is, after carefully studying the blueprints supplied by the architects on Dante's staff.

As he and Pasha stood together, gazing at the bronze plaque above the white, wooden, double doors, she squeezed his arm lovingly. "Moonrise Daily Tribune," his Egyptian cat goddess purred. "I would never have believed I'd find this simple town lifestyle quite appealing."

"Quite appealing. I share your thoughts about our little town." White Fang stroked his lover's arm. "There's a sense of freedom here, Pasha. I don't have to hide who I am. Not anymore."

"Yes, I know." The soft depth of Pasha's voice arrowed straight into his heart. "I am freer to be myself. With my powers it has never been easy. I believe I am even beginning to appreciate the snowflakes swirling around us."

Even though the Montana winter wickedly snarled and howled around them, the farm town Dante purchased—then christened Moonrise Lake—had quickly grown in population and buildings. Given recent snowstorms had dumped a couple of feet of the white stuff, he and Pasha bundled up—coats, hats, boots, gloves.

Then, for the romping-joy of it, they'd tromped through the snow, touring the idyllic American town. After all, not many in town owned the time or energy to shovel off the sidewalks. Not yet.

Yet Christmas holiday lights and decorations cheerily graced the shops and homes. A troupe of teen shifters/supernaturals had enthusiastically offered to string the red, green, and white lights. With the assistance of the ram firefighters, Zerlo and Dilesco, the teens put up the tiny bright lights. Afterward, they caroled popular holiday songs before the town square's Christmas tree. Of course, they'd been rewarded with hot apple cider, hot chocolate, and holiday cookies.

Soon equipment and furnishings would fill the building. Also, a tunnel from the Pleasure Club complex would be constructed.

Once the notice went out that there'd be a town paper, dog-rabid interest ensued. Interviewing for editors, reporters, an office crew, had taken much of White Fang's time the last several days.

As they strolled from room to room, his beautiful Pasha hugged his arm. "I never felt like I belonged in Talbot Peak, as accepting as many were," she confided. "Truth, my handsome beast," her tone turned solemn, "since the glory days of Egypt I've never felt I belonged anywhere on Earth. Now...I–I...this is beginning to feel like home. A real home."

White Fang halted, facing his woman. He beheld Pasha's exotic lovely face, looked into her jewel-blazing eyes. "You belong in my arms," he rumbled passionately.

"I belong in your arms," she softly returned. Passion caused her gaze to become half-lidded.

Their gazes melted into one another, and White Fang witnessed her fiery fierce love for him deep within her eyes. Over the years, he'd done all in his power as a man to stoke those flames of love. From Pasha's first seduction of him, their passion ignited like wildfire, an unstoppable roaring wildfire neither one of them wanted to put out.

Yet, he'd wanted her well-guarded heart as well.

"Country home or an apartment close to town?" he asked tenderly.

Pasha frowned slightly. "You gave up the apartment in Talbot Peak long ago...why?..."

"You know I'll have to be the paw/hand behind the scenes at the paper. At least, for a time." White Fang enfolded her hand, gently squeezing. "No," he answered her look of concern, "I would never give up our suite at the Pleasure Club. Never."

"What about the tunnel, my ace reporter? Not that I—"

"Won't be built until Spring. Besides, I'm thinking, my Pasha, that a home will give us a closer connection to the townsfolk."

"Do you mean as in trusting you with news tips?"

Adoring her phrasing and accent, White Fang kissed the tip of Pasha's nose. He gave a short nod. "That, and folks trusting me, and therefore trusting the newspaper."

"You want to keep a muckraker nose and eye out too, don't you?" Smiling, she arched a brow.

"Can't let ourselves be infiltrated by state bureaucrats, or any enemy group." White Fang drew his Pasha close, and she rested her cheek against his chest.

"I could monitor the gossip in town," she offered. "Although my social skills are lacking in this culture."

"You'll learn." White Fang spoke tenderly. "You didn't answer my question, beloved Pasha. Would you prefer to live in town..."

"Country home," she interrupted, her voice an eager purr. "However, you must agree to allow my decorating skills."

"I wouldn't have it any other way, darling."  White Fang embraced his cat goddess, and rocked her. "You have final say over the house's design. I promise."

"When you promise, handsome, it's gold." Pasha cupped his face between her gloved hands. Love sparkled her eyes.

White Fang covered her hands with his. Love coursed through him, blazing, an inferno that spilled from his heart. "We have an appointment at Kalindi's shop for her special hot chocolate."

"We do?" Pasha lilted, her tone teasing.

"We do. We have house plans to look over."

Pasha raised on tiptoe throwing her arms around his neck. Their kiss should have burned down the Moonrise Daily Tribune. Before the newspaper even launched.

Wishing you love and passion on the wild side ~
Savanna
Savanna Kougar ~ Run on the Wild Side of Romance
Posted by Savanna Kougar at 9:01 PM