...ginormous formation of the spidery-ugly drones... 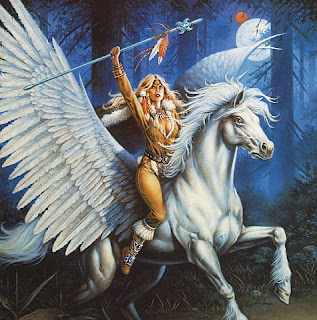 WELCOME... here's the last blog I posted at my previous home, SHAPESHIFTER SEDUCTIONS ...

Tagline: Ex super-soldier boy meets winged filly girl. Will they live happily ever after? In Talbot's Peak territory anything is possible.
~~~~~~

Her blood a fierce blaze, her spirit fiercer, Keina soared beneath the canopy of diamond-brilliant stars. Symone's thighs gripped her sides hard as Keina banked a tight turn. She struck the cold air with her wings, swooping toward the ginormous formation of the spidery-ugly drones—all them her size, at least.

With deadly precision, mere minutes ago, Symone had eliminated ten of the laser-weaponized unmanned aerial vehicles, or UAVs. Whoever, or whatever. commanded the killer-tech swarm—whether humans with joysticks, a human variant species, or an AI in control—they'd made a serious combat mistake.

She and Symone had not been blown out of the sky.

Snapping her wings wide, Keina put on the aerial brakes. She wheeled a u-turn, and with her wings furiously beating the air, she streaked along the back edge of the drone formation that advanced on Talbot's Peak territory.

Pop-sizzle...pop-sizzle...one by one, Symone blasted the enemy UAVs into dust-sized particles—before they were armed, and aimed. From the corner of her eye, Keina witnessed a few flashes, the beginnings of a laser strike. But Symone out-gunned the drones, dustifying each spider machine before the pulse leaped from the mounted cannons.

In the following seconds, reality struck Keina like a swift hoof to the head. Flubergastov, she was in the midst of a life-risky skirmish. For real.

Battle mare...battle mare, she chanted. Baring her teeth, she altered the angle of  her wings, and prepared to fly high above the formation.

Keina froze the movement of her wings, allowing gravity to take hold. They sank like a stone for several moments. Then, straightening her neck, Keina flapped so she arrowed downward. At the same time, she felt Symone twist, and position herself. Rapid fire followed.

Fine ash from the destroyed enemy drones rained down on them. "Level off," Symone called out. "A contingent broke off," she explained, shouting above the wind. "They were waiting for us."

Immediately pumping her wings, Keina stretched her body for more air resistance. Before long, they flew parallel to the ground.

"Can you circle back around, Keina...are you strong enough?" Concern edged Symone's voice.

In answer, Keina winged upward sharply, and with strength surging through her, she looped toward the dark army of UAVs. Instantly, the drones flying rear guard, aimed cannons at them—the whirs of sound ominous.

Black as an abducting gray alien's eyes, Keina thought, as she charged, and listened to Symone pulse her shots. Another line of the spider bots blew apart, their bits spraying outward.

"Climb, climb. High altitude," she yelled a split second later. Six of the sinister drones formed into a wedge as Keina watched. Mechanically buzzing like a hive of borg bees, they approached rapidly.

Keina slapped the air with her wings. Rising fast, she soared above the drone armada. Laser fire crisscrossed beneath her. But not for long. Symone  flash-banged the attackers,  picking them off quick.

The hissing pulse-pulse of Symone's rifle sounded non-stop in Keina's ears as she got her midair bearings, then winged toward the Peak's territorial border. Slowing her speed, she steadied her flight, giving Symone a better platform to annihilate more of the invading swarm.

All too soon, the oil-acrid odor of dying drones billowed around them. Keina attempted to snort out the noxious smell when her nostrils painfully burned. Unable to find relief—and in danger of falling out of the sky when the chemicals filled her lungs—she flew ever higher, yet stayed on course.

"Bloody hell, I can't breathe. Let's get out of here," Symone shouted. "Keina, are you okay?"

As fast as possible, Keina pulled the cleaner air into her lungs. Her heart pounded as if it was about to burst from her ribcage. The flapping of her wings became sluggish, yet remained strong enough to keep them aloft. Even so, she strained to gain more altitude, more distance from the UAV armada—not so much of an armada now.

"Do we need to land?" Symone flattened her hand on Keina's neck, her touch one of concern. "Keina...find a spot to land. Dugger and Drev are about to blast that evil collection of tinker toys to kingdom come. I'll shoot from the ground."

Determined to keep fighting no matter what, Keina flared her nostrils wide sucking in the purer air. Soon enough, the drumming of her heart  lessened, and her wings flapped with more ease.

'Keina, something wrong?' Drev demanded in mindspeak. His worry seared a path through her.

'Looks like Symone decimated the ranks. Stay high, sweetheart,' Drev reminded. 'Dugger and I are about to bring out the big guns. Finish off the *rise of the machines*. Here they come.'

New energy exploded through Keina, and she speed-winged—as her kind called it—toward Drev's position. Not wanting another lung full of foul-stinky drone dust, she also increased her elevation fast.

"Keina," Symone gripped her mane tighter, "are you able to circle behind Dugger and Drev? I'll target any drone that gets through their fire."

Whipping the air with her wings, Keina zoomed for Drev and Dugger. She caught glimpses of drones as they were hit, and fiery-exploded beneath her.

Entranced by the sight, she dipped her head, watching what looked like a fireworks display gone wrong. The spidery limbs of the UAVs tumbled in a weird aerial dance.
"The *dark-side powers that be*...their commanders must be going looney-crazy," Symone shouted near into Keina's ear.

'What?' Keina streaked toward her Drev. She felt it to her equine bones, something was terribly wrong.

'Directly behind you, Keina! Fly higher. Put the speedster wings on. I want a clean shot at that monster drone."

Wishing you love and passion on the wild side ~