It is like magic ... Summer of Her Golden Wolf 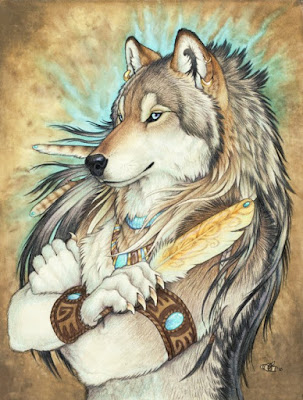 I have to say it. Where has the year gone??? It has flown by, a super rush of wind.  And I'm not looking forward to winter.

So, the big magical eclipse has come and gone. And yes, the vibes are different from my experience. It's as if we've shifted into a different realm where stark reality rules. However, reality is also more "changeable" now. That is, by the overall will-intention of humankind. Thus, your thoughts and intentions are more effective toward creating a brighter better future.

Okay then, I've been so interrupted by life events, including a surprise visit from my sister who lives in San Francisco, that I just didn't have any time left to post...that is, until now.

And, an early Fall has definitely taken over my tame prairie. The little toadies are still around, showing themselves to me now and then. I had to chase another one down to put him/her back outside. They are so cute.

Anyway, I finally managed another two hundred words of my ongoing flash-scene story. The previous flash scenes can be accessed above. Just click the tab for the page.


Summer of Her Golden Wolf

XIX
Magick, Kassy repeated as the thought seized her mind. It is like magic.
"Beautiful," she murmured. "You are so beautiful." She caressed the golden wolf dog with both hands, lost in the sensations.
You are beautiful, flooded her mind.
"What?" she uttered in surprised response. His nose kissed hers again.
"What a sweet guy you are." Kassy stroked her thumb from his nose to the top of his magnificent head. His ears flattened, softened in appreciation.
I can't explain your presence, wolf-dog, yet somehow I feel safe. And I'm feeling much better...how is that? Mentally, Kassy shook her head.

XX
Zorzun silently howled with happiness. She did hear his mindspeak, even if she didn't realize it. His woman also naturally accepted the healing frequencies he poured inside her.  "Name," she crooned. "What is your name? I mean, you need one. You probably have one. Gosh, maybe you're lost. Do I need to find your owner?"
Zorzun vigorously shook his head *no*.
"Okay then," she drawled, still petting him. "We'll decide on a name later." She sat up so they were eye to eye.
Zorzun stared into her amazing blue-glittering eyes. The soul of a high priestess stared back at him.